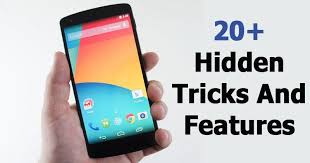 For Android users, we are here with Ultimate Hidden Tricks and Features Of Android. Today Android devices are remarkably smart and can be used for lots of purpose in this tech world. Till now we discussed many neat tricks for Android, and this time, we brought you some cool secret Android features. Practising these hidden features can effortlessly customize your experience with your Android device. So have a look at the complete guide below.

Below we are going to discuss some cool things that might be unfamiliar to you. So have a look at these cool features below.

Well, many of you will know about this feature, but I am sure very rare one utilize this. This is a very helpful feature that comes with Android. You can monitor your data usage and control it. You can set the maximum data limit for a particular date. To do that, Open setting > Data Usage > Set Mobile Data Limit, here you can configure the data limit. This feature allows you to track, ring, lock and wipe your Android device if you lose track of it. So, make sure to turn on this feature. You can create the backup password for your Android device to recover it using your desktop. Just follow the below steps to proceed. You can minimize your battery power consumption by using the neat trick in developer mode which we’ve explained in steps mentioned below. Enabling this feature will allow you to stop activities when you close it completely. This will reduce battery consumption and even data usage too. For this, you can use the Mock the Location to make your GPS tracker tool track your exact location which can be used by many apps to spy on you.

Also Read  Find Out Who’s Tracking You Through Your Android

In many cool apps, USB debugging is used for the perfect working of your Android with your PC. And this feature is only available in developer options that you can implement from below. #11 Make Your Device Awake while Charging You can make your Android active while you were charging it, it is the best way to enable this cool feature:- It is the ultimate hidden ability on your Google Chrome browser that you might not believe, but you can see your SD memory data in your Chrome browser. You can do so by:- Your Android can help you download maps of the particular area in your Android to browse it when you don’t have the internet connection. Many of you will think it is impossible, but actually, it is possible Read my acticle below to see How to use Google Maps Offline.

Google Maps is an awesome app developed by google to locate any destination on your android mobile .This map helps you to navigate to all over the world. It have all views like street view, Traffic view and Satellite view. This app works on internet and use your GPS to track your location. Now whenever we navigate through google maps it needs some fast internet connection to load all the direction and places. But sometime due to some network problems we are unable to access Google Maps in our android device. So in this post i will tell you the a method to Use Google Maps Offline. Many of you will think it is impossible ,But with the method given, it is possible to save the google map for offline use.

How To Use Google Maps Offline 2019

Method To Save Google Maps For Offline Use :-

#14 Sending And Receiving Your Android SMS on PC If you are using an Android smartphone, then you have a fashionable solution by which you can get all your SMS on your PC. Moreover, you can browse them all on your PC, and there will be no need to pick up your Android and read every message. You can use your smartphone as a remote controller to control all your smart devices. There are some apps available on the Google Play store that helps to control your IR electronic devices remotely. Well, if you love to make some tutorial on your Android smartphone just to share with your friends, then this will be useful. This option enables a white dot on places where you have touched. Head over to Developer options and then search for the option “Show Touches” and enable it. Well, Android operating system implements lots of the features. Once you have enabled the developer mode, you can also simulate the color space to reduce the eye strain. Users just need to head over to the Developer Options and then needs to find “Simulate Color Space” and then can change the filters of Android. While we are on the call, most of the time, our thumb is near the power button. So, enabling the Power button to End call might be the easiest way to end the ongoing call. You need to head to Settings > Accessibility and search for the option ‘Power Button Ends Call” and then enable it. If you have a weak vision, then you can enable the High Contrast Text from Settings > Accessibility. Once you enabled the option, your text will appear crisper and easy to read. Well, if we look around for a number of years, we have been able to broadcast our Android phone’s display to the larger screen using a Chromecast. Well, Android users just need to make sure that they have installed the Google Home app for Android. Open the app, tap Cast screen/audio from its menu, and then choose your Chromecast. Through this, you can even mirror your phone to a larger screen. Well, this new feature is added to Android 7.0 Nougat. This new feature gives a user the ability to run apps side-by-side or one above the other. To set up the new feature, tap the Overview button (square icon below the screen) and then choose which of your recent apps you want to see.

You just need to hold and drag that app’s title bar to the top or left of the display. Once done, simply choose another running app to appear alongside or under it. Well, if we talk about web browser on Android device, without any doubt, Google Chrome is among the first choice of users.  Actually, Google Chrome hides a secret which eventually allows users to save a web page as PDF format.

#24 Boot Your Android In Safe Mode Well, there are times when we have to face the erratic behaviours of the apps installed on our device. Well, sometimes we mistakenly install some apps that display an array of obstructive ads that don’t allow you to do anything else.

In such situations, it’s best to boot the Android phone in safe mode. Safe Mode disables all the third-party apps which makes it easy to recognize and remove bad apps. To boot the phone into safe mode, tap on the power button and long-press the option to power off.