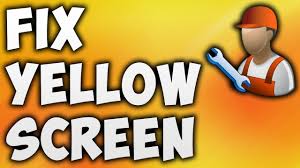 Some of the users have said that the monitors of their Windows 10 have yellow Tint after Windows 10 is updated. Does your display also have a Yellow Tint? There are some solutions which are given below, which will fix the yellow tint.

For a few of the Problems of the computer, you can download the PC Repair Tool. This software will solve all of your common computer errors, malware, hardware failure, or any.

Few of them gets problem in their Windows 10 display. The display gets a yellowish color. If you are one of them and want a solution to fix the Yellow Tint from the Monitor, then you have come to the right place. There might be a hardware problem, or you need to do some display settings on your Windows. So, check out the whole article and fix the Yellowish Tint on the Monitor.

How To Solve the Problem of Yellow Tint In Windows 10:
Check out a few of the methods which will help you to solve the problem of Yellowish Tint on the Monitor. Method 2. Update The Graphics
We can solve so many problems by updating graphics card drivers. So it will be very helpful if you check the graphics card driver and update it, if outdated. One of the fastest ways to update the Graphics is using the Utilize driver updater software in your windows.

Download Driver Booster from the given link on your Windows. Once you install it, the software will scan the drivers automatically. After that, it will show a list of outdated or corrupted drivers that needs to be replaced. If there is any update, then click on the UPDATE button for the graphics card.

Method 4. Check The Display Color Setting
Most of the desktop has additional color settings of a different type. On the OSD menu of your desktop, there might be Contrast, Gamma, hue, saturation, color temp or tint options. So, it is better to check your monitors OSD color settings and adjust it according to its need.

Like, if you want to configure Intel color settings, then do right-click on the desktop, choose Graphics > Properties > Display and then Color Enhancement and open the options. Look for similar options and restore the color settings to default for other PCs also.

Method 6. Cancel New Software Installation
If you have recently installed any new software, then you better check it. This problem can be true if you got a yellow tint after you have installed new software. The e-reader software has a special reading mode, which turns the blue light off, which is dangerous and hence gives the yellowish color on the screen.

So, if you have installed new software, than better check the settings of that software and find out the way to disable the yellow light. Or if there is no solution, then it is better to uninstall that software.

So, these are some of the solutions which can solve yellowish tint problem on the laptop in Windows 10. There are many other methods available on the Internet, which can solve this problem. If you are having the same problem of Yellowish tint than try out the given methods. We hope, the article was helpful for you, don’t forget to share to friends.