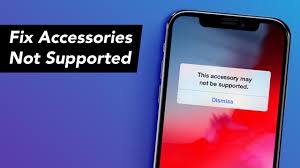 When you use a cheap, non-Apple charger to charge your iPhone or iPad, it’s likely that a window with the message “This Accessory May Not Be Supported” will appear on your iPhone screen. Sometimes even if you use your original Apple cable, this window will also pop out. It can also happen when you have an iOS update. As I mentioned just now, the error on your iPhone, “This Accessory May Not Be Supported”, might be caused by the wrong cable, if you happen to be in that situation, change your charging cable into the Official Apple cable or an excellent OEM cable. A wrong cable can also result in the problem “iPhone won’t charge”.

Tip 2: Clean the charging port of your iPhone

Use a thin tool to help you clean the charging port like a toothpick or toothbrush to clean the dust or pocket lint in it. This tip is simple but needs carefulness to do it. Charge your iPhone. When “This Accessory May Not Be Supported” pops out, dismiss it and switch on “Airplane Mode” on your iPhone. Then shut down your device and restart it two minutes later.

Tip 4: Choose another power supply for your device

The power supply device needs may vary. So you can try a different power supply when “This Accessory May Not Be Supported” error happens.